On one occasion, Leonardo Da Vinci said, “Once you have tasted flight, you will forever walk the earth with your eyes turned skywards, for there you have been, and there you will always long to return.”

Eighth-grader Henry J. has goals of pursuing an aviation career and the means to achieve them. He takes classes at Butler Municipal Airport and has been steadily learning how to fly for over a year.

“I just wanted to do something fun over the summer. And I’ve always been interested in aviation in general. So my parents signed me up,” Henry J. said. “And really, as long as you have money, you can join a club like that.”

But Henry’s airplane interest started long before he began taking lessons. In fact, he has been curious about aviation for most of his life.

“The [first] time I remember actually caring was when I was six,” Henry stated.

Such a fascination with flying, however, is not a necessity to be successful in the classes Henry takes. The program consists of about four students, with two instructors that teach them.

The students and instructors rotate through eight planes.

“It’s a little bit expensive, but besides that, as long as you have a little bit of money, it’s worth it,” the eighth-grader said. “…Be a little bit motivated, and as long as you’re willing to listen, then you’ll be able to learn…It’s not one of those things that you have to study every day to be super committed to it.”

A “little bit” of motivation, as Henry puts it, can get you valuable experience and treasured moments.

“It’s awesome. When you look out of the canopy, and you see that you’re 1000 feet in the air, you just realize that you’re so small, but it’s just fun. I mean, like the experiences that you have, not even just flying the plane just being at an airfield are awesome,” Henry said. “…Just being able to travel around knowing that you’re doing what you love, it’s an amazing feeling…It’s a different experience from anything else that you can do.

Each weekend, Henry visits Butler Municipal Airport for his aviation lessons, an hour away from Peachtree City, in Butler, Georgia.

“I go there at seven. Then we do a ground school for like two hours and [they] brief us on conditions that we’re going to be doing that we haven’t done before,” the eighth-grader said. “Then we tow the planes out of the hangar, and we fly based on who gets there first.”

However, not everyone can just fly any plane. There is a progression of aircrafts used by students as they become more experienced,

“Last year, I flew my first powered plane. Then, after four or five flights, I got into a glider club,” he stated. “So now I fly planes that don’t have engines, behind other planes, and then we stay in the air for [about] 40 minutes.”

No matter how rewarding aviation can be, certain challenges come with the responsibility of flying a plane.

“You’ve got to keep track of where your control surfaces are, how fast you’re going, what your altitude is, especially the nose or the angle of the plane, because in a glider when you have your angle up, speed goes down, you stall,” Henry J. said.

Since students are learning how to overcome these obstacles 1000 feet above the ground, some might say that their learning environment is dangerous. However, these worries can be put to rest, as there are certain safety measures in place.

“It’s not scary; there’s a guy in the backseat who handles anything if you screw up,” Henry J. clarified.

Putting in the effort to learn a certain skill can lead to great rewards, even at middle school age.

“I’m about to get to the point where I can solo, so I just fly by myself without an instructor…you can do that at 14, and then two years from now [at 16], I’ll be able to get my license and go wherever I want,” Henry stated.

However, his plans for aviation do not end there. This eighth-grader has goals far beyond middle school.

“I’ll hopefully join the Air Force, get into the Air Force Academy. Hopefully, graduate, and then that leads into a career in aviation. If it ends up being the other way, I could join the Navy, get into the Naval Academy and do the same thing but in the Navy,” He explained. “…I’m down to do anything else as long as I get to fly.” 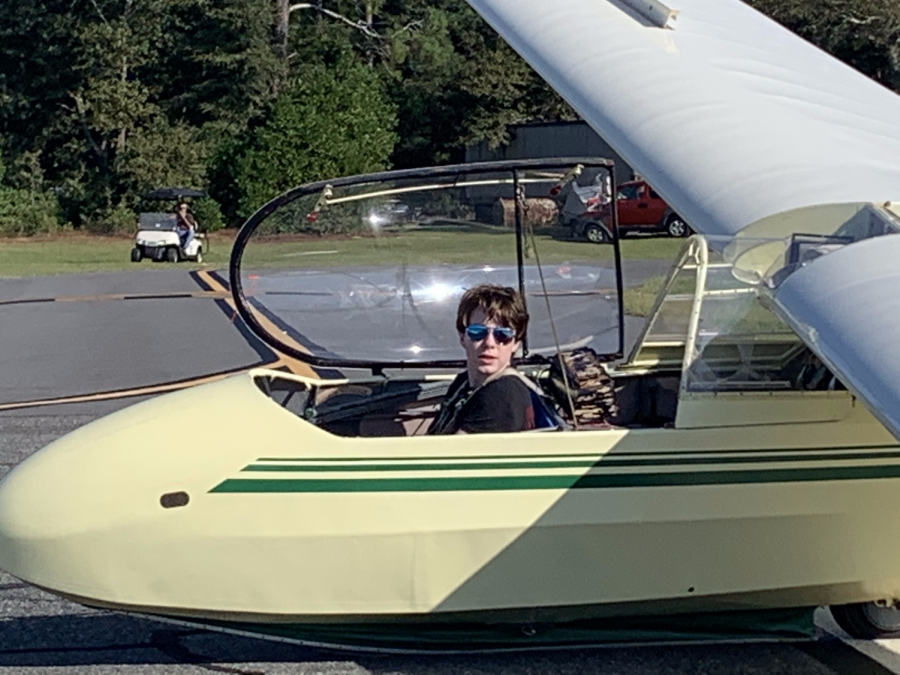