The Most Famous Mailbox 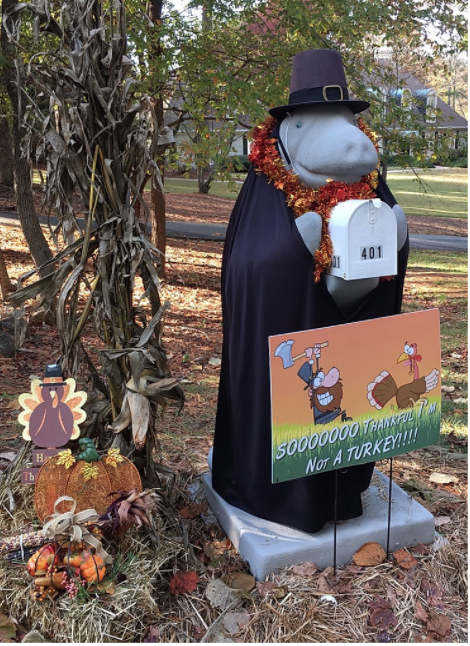 Manny the Manatee wears a bewitching Costume for Halloween.

Manny Manatee is not a real Manatee; he is a mailbox located at 401 N Peachtree Pkwy, Peachtree City GA. Manny Manatee got to Georgia in May 2015 and is one of the most famous mailboxes in Peachtree City GA.“We got him because I had a business partner that had a home down in the Florida Keys and many people there had manatee mailboxes! So I playfully said that I was gonna get one of those. And when it came time to replace our old mailbox, I decided to order one and had it made and shipped from Florida to Georgia!” said Richard Beardon.

Although the Manatee is sometimes seen in a witch costume or an occasional apron, its name is Manny. “We chose Manny because it was the only thing we could think of and that it rhymes with Manatee!” said Richard Beardon.

The Manatee Mailbox has a large wardrobe often accompanied by props and signs. Passersby all have time to view the outfits and props when they come to a stop at the intersection of North Peachtree Parkway and Walt Banks Road “My wife makes his outfits! I help sometimes but it is mainly her!” Manny the manatee has an outfit for every season or event for the year.

“We got Manny Manatee to do something fun and make people smile as they wait to cross the intersection. “They do not do anything political or promote commercials, but they do help local causes. They just finished selling Manny Manatee ornaments and 100% went to the Real-life Center and Fayette Humane society.

“We do get many cards and letters from people about how much they like Manny Manatee!” said Richard Beardon, so when you are waiting to cross the intersection of North Peachtree Parkway and Walt Banks Road make sure to take a look at Manny Manatee and his cool outfits.