Transportation on the Golf Cart Pathes 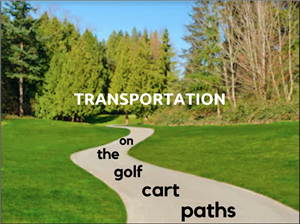 In peachtree city, golf carts paths make it easier to travel through the city faster and considerably safer. Golf carts allow teens to travel without a driver’s license, but a permit is still required. To get a permit, you must be 15 years old, therefore people 14 and under cannot drive golf carts unless accompanied by an adult. Those people need to travel around the city too, but what is the best way?

Golf cart paths allow bikes, skateboards, and scooters. These three things come in many different designs and can be built with lots of extra parts that may not be legal to use on the paths. Motorized play vehicles like electric scooters and skateboards are prohibited on the paths and you can be fined with a minimum of $250 if the usage of these vehicles takes place. These may only be used on private property for it creates an unsafe environment for the citizens.

There are safer alternative choices to use as transportation on the paths, but what is the safest? Between biking and skateboarding, biking is the safer choice. Bikes have breaks to easily stop while skateboards don’t. Bike rider, Jack Glazier, was asked if he thinks biking is the best transportation for young teens. His response was, “ Yes because you can get a good exercise out of it, and with friends, it’s very fun.” Although biking is safer, skateboarding has proven to be faster. Skateboarder, Alanis Arzuaga was asked why she thinks skateboarding is the best form of transportation. Her answer states, “ Skateboarding is very fun and gives you a great thrill. They are also very easily portable.” If in a hurry, skateboarding would be considered preferable but if you aren’t, biking would be highly recommended. Being safe on the paths can save lives including yours and others.

Many other unique, non-motorized, transportation can be used including roller skates, unicycles, lipsticks, and drift skates. These may be hard to use, but with practice, young teens in Peachtree City will be able to get around faster, easier, and safer